A Commute To Gloat About

About three times per week I ride a water taxi from my Vashon Island home to my workplace on the waterfront in downtown Seattle. The water taxi is a passenger-only ferry, a hydrofoil, that is new, large (about 225 bodies), comfortable, reasonably priced, and damn fast.

Here's the gloat part: for me, the logistics are great.  I can roll down the hill from my home to the ferry dock in about 13 minutes. The water taxi trip itself takes about 25 minutes. Once downtown, I walk along the waterfront for about 1.3 miles. For lunch I can walk another two blocks and hang at the Seattle Art Museum Olympic Sculpture park which is basically stunning. And then at day's end, I walk the 1.3 miles back to the water taxi dock. Going uphill the third of a mile home is usually not all that much fun, especially on our rainy, dark autumn and winter nights, but I figure the exercise helps keep me if not young-ish, then at least mobile.

So today was one of our quintessential freaky transition days that begins one way and concludes very differently. This morning was thick fog that limited visibility and contributed to fun photography. As I waited for the tardy water taxi, a large vehicle ferry pulled into one of the two adjoining vessel slips. This route goes to West Seattle. 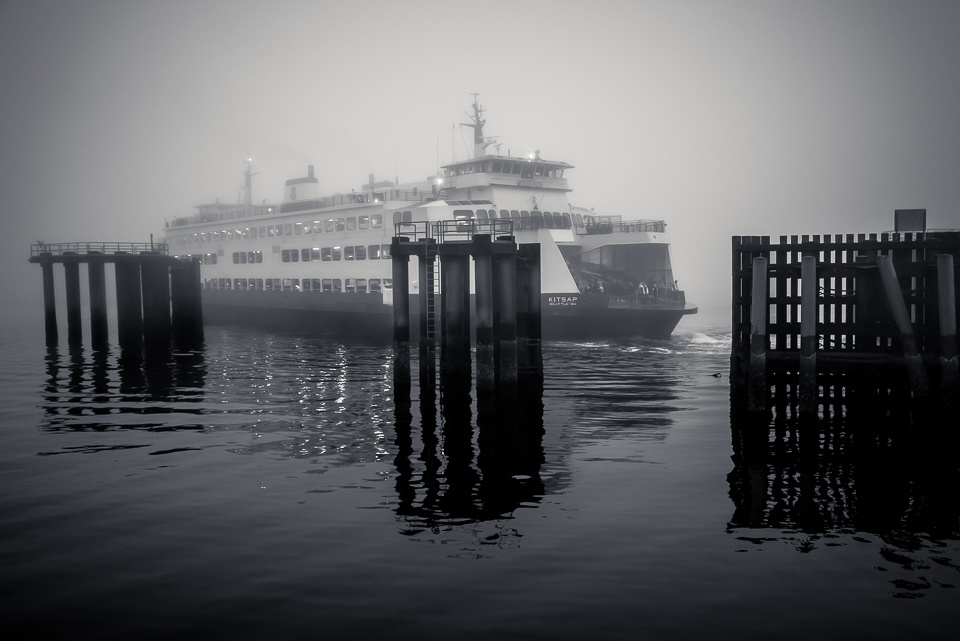 Waiting for Water Taxi From the Island to Downtown Seattle

I was glad I brought my 24-70mm f2.8 zoom lens so I could tightly frame the scene using the vertical "dolphins" as visual borders.

When we arrived in Seattle the sun was just starting to appear, but the scene was not photogenic enough for me. That changed, however as the day unfolded. Around lunch time there were still enough clouds and residual fog that added layers to the sky. I hit the outdoor patio that sits above Elliott Bay with a northwest view to the Olympic mountains.

I noticed one of the maintenance staff in a cherry picker, and he was repairing something on the exterior wall. Fortunately the lighting, his position, and the vista came together for me to be able to capture what I hope will be a shot that honors his and his team's fine work. Most likely he would have had to do the same task if it was miserable outside instead of glorious. 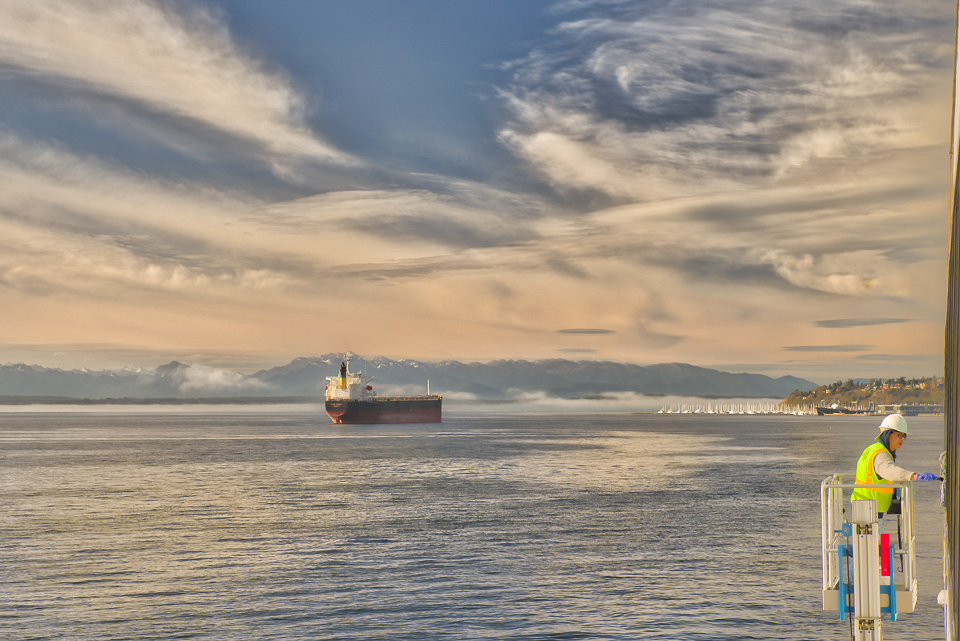 Maintenance Work with a View West

The most rewarding part of my commute home are the views we get of downtown Seattle and the waterfront as we leave for the island. When we get on the water taxi the outdoor seats face west. After September, I'm usually not hardy enough to sit outside for the whole ride--I'll hit and run for a few shots, or to chat with a friend for a bit, and then return to the comfort of the interior, maybe even snooze for 15 minutes. But today was too visually compelling 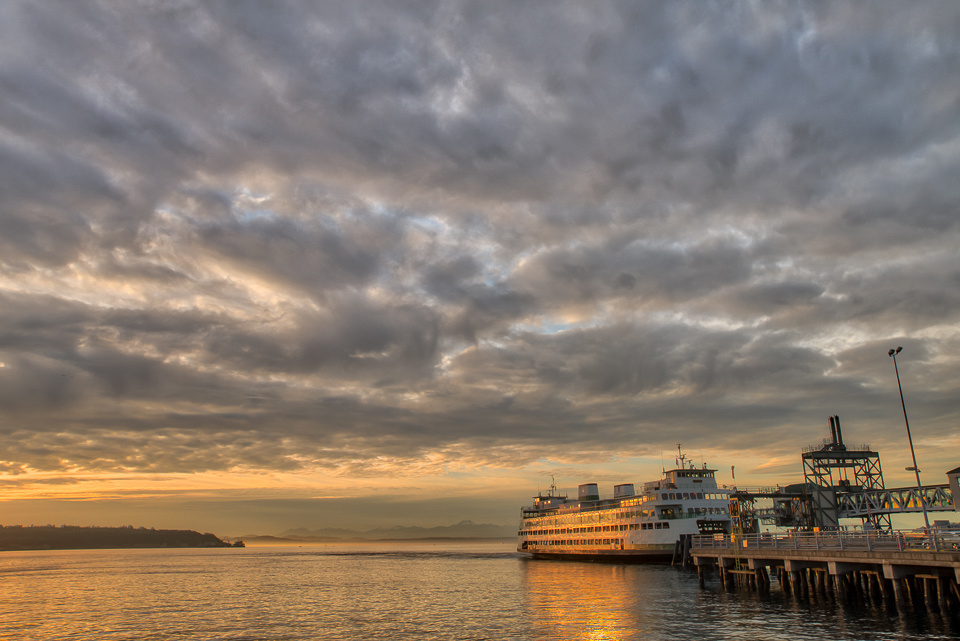 This is another of Washington's mega auto ferries that take commuters between downtown Seattle and exurban cities like Bremerton and Bainbridge Island. But the light and the sky are the stars here.

The water taxi then reverses direction heading directly west, allowing us east facing rear riders with a diminishing view of downtown Seattle as we head off. 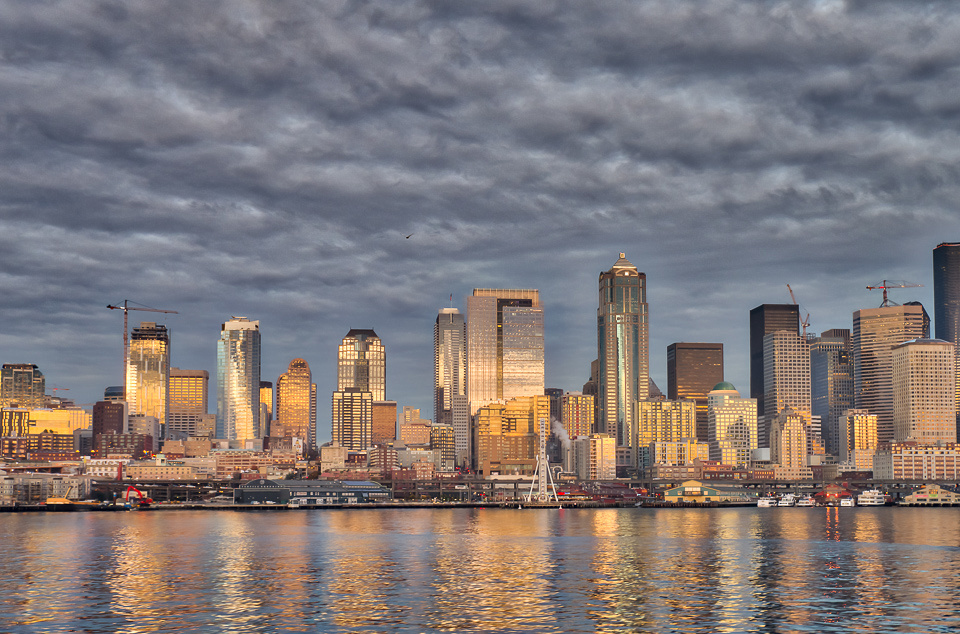 Downtown Seattle As We Head West

Happily there was just enough daylight left to see the dissapating clouds over the island. 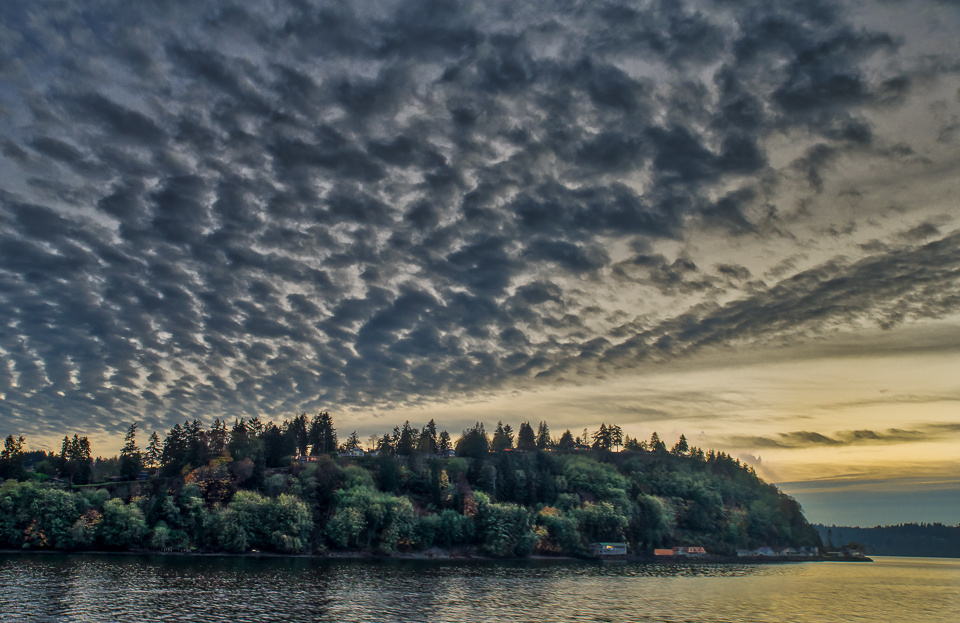 Arriving on the Island

This is the part of the rock where we live (nope, not waterfront, nor water view). And as the darkness fell, it was good to be home.

Notes on the photography technologies used for these images: These photographs were taken with a Pentax K-1 DSLR and a Pentax 24-70mm f2.8 zoom lens. Aurora 2017 HDR software was used to merge three bracketed exposures into a single HDR-type of image. Additional post-processing was performed using Lightroom CC or NIK Silver EFEX Pro2 software.